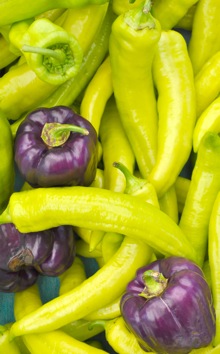 These sweet yellow and purple peppers made an interesting study at this morning’s Farmer’s Market which, unlike some other local markets, is held all year round.

Began in 1992, the Menlo version features a wide variety of locally-grown organic fruits and vegetables as well as a sampling of other wares, such as olive oil and beeswax soap. It takes on a festive air, thanks to the live music usually be performed on the Chestnut Street end.