Menlo mainstay: A church and its congregation 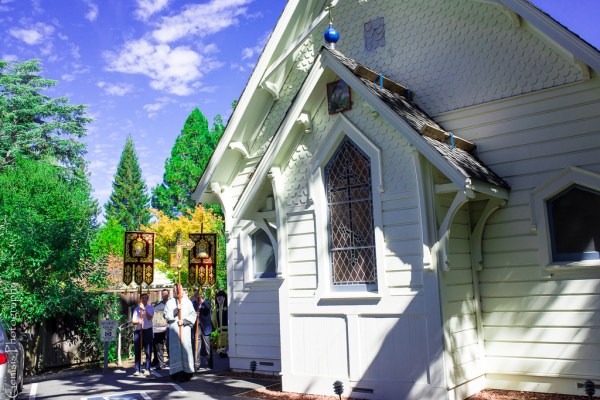 In 1886 a “simple redwood building of approximately 27 by 48 feet” was erected on Encinal Ave in Menlo Park, the first church building of Holy Trinity Church (Episcopal). It was to have two more locations — transported to a lot on Oak Grove near Laurel in 1897 (moving cost $1,200!) and then to Pine St. in 1947 as part of Holy Trinity’s larger campus on land the parish had purchased at the corner of Ravenswood and Laurel in 1902.

It arrived at its current location on Crane St. in 1957. Each time, notes Stanley Pearce in his book on Trinity’s history, Lift Up Your Hearts, towering oaks have enhanced its location.

Today the Nativity of the Holy Virgin Church is home to a Russian Orthodox congregation, a mainstay in itself, having started services in 1951 when the church building was still on Pine St.

According to current rector, the Rev. Fr. Hermogen Holste, the congregation is predominately immigrant and services  (10:00 am on Sundays) are conducted in Church Slavonic, which he described as the “King James of the Orthodox church.”

The church’s interior is strikingly beautiful — filled with a multitude of icons while retaining the stained glass window that was part of its Episcopal past. New changes may come, says Fr. Hermogen, as the growing congregation needs additional space.

Photo courtesy of Nativity of the Holy Virgin Church