Preparing men to be priests for over 100 years 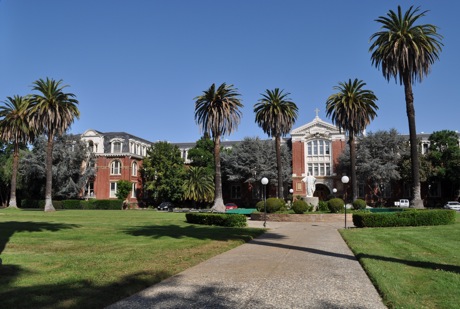 “On September 20, 1898, five Sulpician priests and 34 young men gathered at the somewhat remote location of Menlo Park to inaugurate what was to become the preeminent seminary on the West Coast – St. Patrick’s Seminary,” writes Jeffrey M. Burns in his history of the seminary.  “At the time of its inception, St. Patrick’s was the only institution of its type west of the Rocky Mountain.”

Hidden by behind its large gated entrance and surrounded by foliage, the main building is a surprising find amidst the ever-spreading sprawl of suburbia. (About 40 acres once owned by the seminary is now the Vintage Oaks.) Throughout the years the seminary has stayed true to it mission.

Writes Father James. M McKearney, S.S. M.S., M. Div. S.T.D., who was appointed President/Rector in July, 2009: “We at St. Patrick’s Seminary and University, as a Sulpician community, are intent on helping others to find God in their lives in the midst of a particularly challenging social climate. We recognize that these are also exciting times as we witness the diverse peoples of the world coming to St. Patrick’s to study, pray and make their dream of becoming a faithful Christian and priest a reality.”