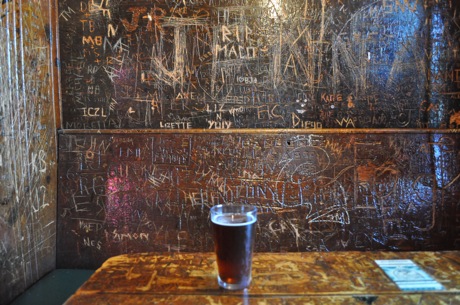 In most ways, the Oasis Beer Garden has changed little since Bernie Tougas opened it in 1958 – and that’s what keeps successive generations of locals coming back for a game day beer.

Located in Menlo just a couple of blocks from the Paly city limits, during its first few decades it was the closest place to get cold draft near the Stanford campus. (There were mileage limits in place for both the sale of beer and alcohol.)

Today the signature carved  wooden booths and Stanford memorabilia remain along with an assortment of games to amuse the kids lining one wall. It’s still the place to watch football games in the fall – Cal and Stanford on Saturdays; the 49ers on Sunday.

But long time fans swear the burgers declined when pizza was introduced and it seems a bit more sanitized (no tree sticking out of the men’s room, no splintery front door) since corporate ownership took over after  Tougas’ death in 2005.

Those sticking points aside, few can envision Menlo without the “O.”