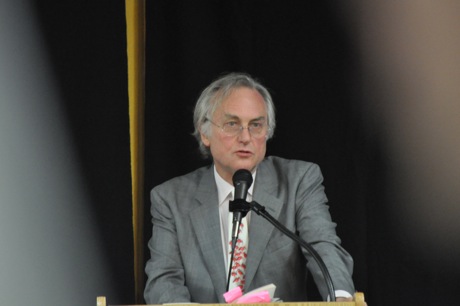 Esteemed evolutionary biologist  and God debunker  Richard Dawkins was at Kepler’s tonight reading, in an oh-so-melodious Oxonian tone, from his latest book, The Greatest Show on Earth: The Evidence for Evolution. The bookstore was packed, and the crowd (Largely secular? Does everyone get to speak to the choir?) twittered at each mention of the triumph of evolution over creationist theory. Dawkins’ whimsical  choice of ties has been previously noted; tonight it was pink flamingos.