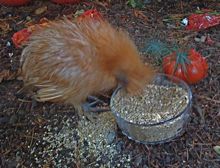 If you believe Sunset and the New Yorker, having chickens is a growing trend in suburban neighborhoods. That’s nothing new to Menlo Park; a “herd” of chickens has long been part of the backyard scene at a home near the San Mateo Drive bike bridge.

More recent arrivals are three laying hens that have come home to roost in a very modern chicken coop in the backyard of Elaine Hammond and John Donald and their two young children. They include Priscilla, a buff colored silkie; Penelope, a brahma; and an as yet unnamed white crested Polish blue – all who took up residence last week.

Reports Elaine: “Chickens are appealing for several reasons.  They are low maintenance and fun for us and the kids.  They eat table scraps and are reducing our garbage. Plus the eggs they will provide fit in nicely with the growing awareness of eating local.” (Still adjusting to their new digs, the three have yet to lay an egg, although the expectation is three to four eggs a week per hen.)

John and Elaine purchased their hens from the self-described “Chicken Queen” in Rohnert Park who they found through Craigslist. “She had about 200 chickens, in more breeds than I knew existed,” said John.

Keeping chickens in suburbia is made easier thanks to the new style coop. “We purchased the coop second-hand from someone who was upgrading to a larger coop,” said John.  “It’s called an Eglu and  is made by a company called Omlet.

For those who want to follow the rules, the city of Menlo Park allows up to six chickens in a backyard – but no roosters.