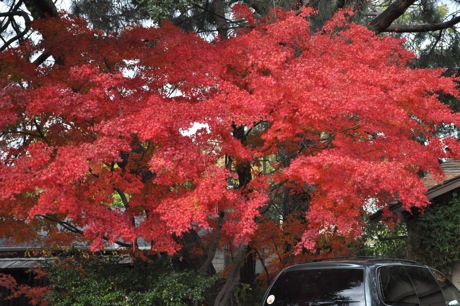 This contributor has spent a bit of time trying to validate from an outside source what she’s long believed – and what her mother, a Menlo Park resident for 50 years also believed.

Menlo’s fall color display peaks around Thanksgiving, much later than occurs in the more-famous-for-its-color Northeastern part of the U.S. There are a variety of deciduous trees in Menlo, providing a wide color palate, including bright red. The United State National Arboretum gives a full explanation of of the science of color in autumn leaves.

Meanwhile, on the rainfall front, the predicated big storm that pooped out before hitting the Bay Area last Friday, did drop .1″ of precipitation in Menlo, according to Bill Russ’s backyard gauge, bringing the season total up to 4.1″ compared to 2.6″ last year at the same time.