Garrett Gafke and his Kaiser Jeepster 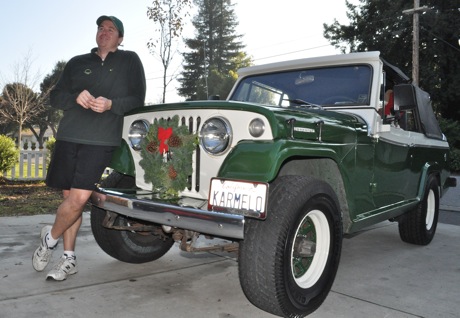 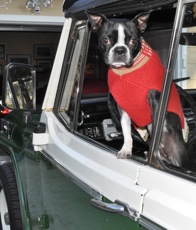 What in the world is that very  green and white “automobile-with-an-attitude” spotted in a Menlo driveway – at least when it’s not under wraps of its car cover? It took owner Garrett Gafke to provide the answer: a 1967 Kaiser Jeepster Convertible, of which only 300 to 400 were ever made. This particular car has been in Gafke’s family for a quarter century and was fully restored about 20 years ago. “We found it in Reno and kept it at a family home in Carmel just to run around town,” he explained. And that’s what he does with the car today – uses it to do errands around town where it always get attention from the curious.

Meanwhile, Gafke, who is CEO of Paymate, an Internet-based payment system, as well as a car collector, has begun the Jeepster’s second restoration, which he explained starts from the inside out – the innards that make the car run before the exterior that make it fun. Due to its limited production run, parts are rare and hard to find and often need to be machined. The frame is then taken apart piece by piece to get at rusted metal, and oxidized chrome pieces are sent out to be replated.

As you can see, Holly the Boston terrier was decked out in cheery holiday garb, in anticipation of a run in the Jeepster with her master.