The Monday club gathers at Borrone 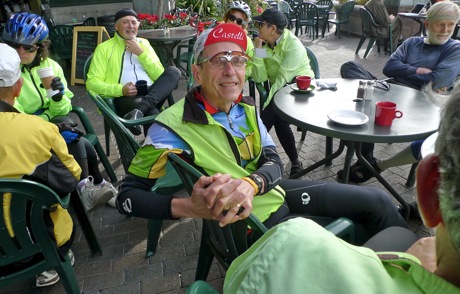 Habitués of Menlo’s Cafe Borrone may have noticed a small sea of brightly-colored safety garments on Monday mornings (between 10 and 11), all of which adorn bicyclists of a certain age. A curious InMenlo staffer was told that the standing Monday morning coffee date is a gathering of several Peninsula cycling groups, including the Western Wheelers, and the Skylines and Almaden Touring cycling clubs.

Participants start in either Los Altos or Foster City and wend their way to Menlo and back via various scenic routes, making for an approximately 26-mile round-trip ride, according to participant Joe LaPoint (pictured, in red cap), who’d just made the Los Altos to Menlo leg. So numerous are the riders that a significant portion of Borrone’s  outdoor seating is taken over by the group, and the sidewalk is so jammed with two-wheelers that it resembles the ever-packed subterranean car park that serves the Café.