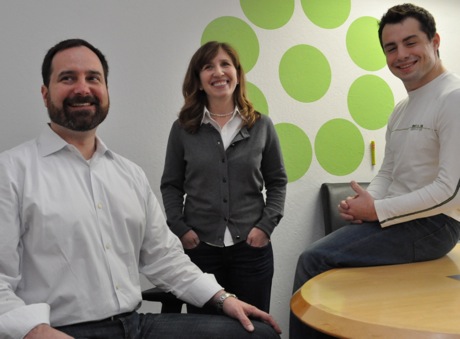 Note: This is the first in our series on start up businesses in Menlo Park. If you’re part of a start up – investor, executive or staff – let us know what your company is doing by emailing us at: tips[at]inmenlo.com.

Want a  cheap, kid friendly restaurant where you can eat outdoors and have fun – even late at night? If your using Center’d as your local search and discovery site, you’ll find out that the Dutch Goose on the Alameda in Menlo Park fits the bill. The not-quite-two-year-old start up is attempting to transform local search by helping people more quickly find things to do and places that meet their very specific needs.

“We analyzed over five million reviews which contain 40 million snippets,” explains Dan Visnick who heads up marketing (pictured, left to right, with CEO Jennifer Dulski and software engineer Chris Millican). “We then organize places by what we call flavors using sentiment charts – negative, positive, neutral. We also bubble up the most frequently used snippets to give people a quick snapshot of the restaurant or activity.”

Like other Menlo Park-based startups, the company’s first offices were located close to 101. Now they’re one of the few start ups based in downtown. “What really attracted us to downtown Menlo was the location in general – halfway between San Francisco and the South Bay,” says Visnick. “It’s in the heart of the Peninsula. The train station is close by and it’s good as a biking destination – a number of our staff cycle to work.

“A lot about Center’d is about connecting businesses and consumers. Being located in downtown Menlo Park reminds us that’s what we’re about. Downtown has everything you need.”