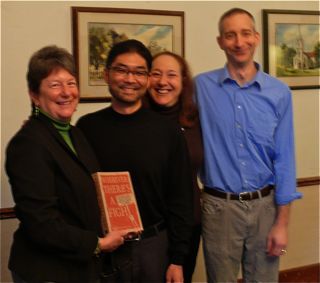 Thanks to the organizing efforts of Lauren John (second from right) and support from the Friends of Menlo Park Public Library, the first of this year’s Salon Menlo series was held today at the Menlo Park Recreation Center. Today’s discussion focused on the Hollywood 10 blacklist of the 1950s. Authors Elaine Elinson and Stan Yogi (first and second from the left),  who wrote Wherever There’s a Fight, participated as well as filmmaker/librarian Nick Szegda (far right). This is the first of four planned salons.

i’m interested in this group. would you please add me to your email list or contact me in some way so i’ll know about upcoming meetings (dates and subjects)?

Marian:
Contact me with your e-mail address and I will add you to the list.
Lauren John