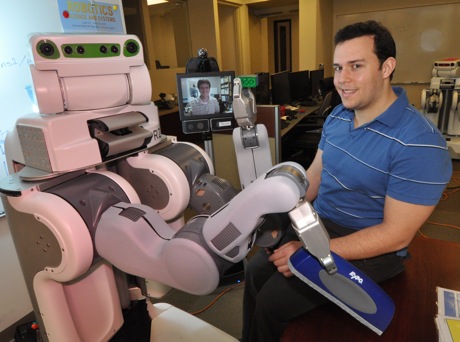 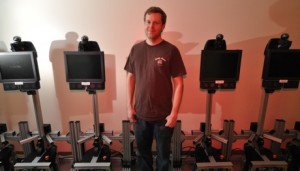 The visitor was, to say the least, amazed as Willow Garage CEO Steve Cousins conducted an impromptu tour of what must surely be one of Menlo Park’s (if not the world’s) premier robotics research facilities. Asked what might be interesting, Cousins replies, “Everything!”

Privately-funded Willow Garage is committed to research and development aimed at jump-starting the fledgling robotics field, a goal that has resulted in a facility where there are almost as many robots as humans, some of which can roam the halls autonomously and plug themselves in when their batteries are low. Other “telepresence” robots allow remote workers to move around and interact with their on-site peers.

There is activity everywhere: In one very large room, technicians at long benches are assembling robot wheels and sensor-studded “heads;” in a robot gym, two mechanical arms are endlessly repeating a complicated series of movements that are graceful, fluid and eerily human. In a another room dozens of robot components – joints, arms, motorized casters – are working out on the robot equivalent of weight machines. CEO Cousins notes that the machines perform their exercises for weeks at a time, helping engineers understand the durability of their designs.

In another chamber, dubbed “the Green Room,” robots and their designers are everywhere, picking up delicate glassware, stacking giant Legos and otherwise amazing the bemused visitor. In one corner, robotics program co-director Eric Berger works with his creation, the PR2 Beta (PR stands for Personal Robot) as his Indiana-based colleague Dallas Goecker looks on via his “Texas” telepresence robot. Just outside the Green Room, robot designer Curt Meyers pauses to be photographed with a bank of  his “Texai” – 25 of which machines line a long hallway, waiting to start experiments in human-robot interactions.

Willow Garage’s creations aren’t quite ready for duty in the home, but the company is dedicated to hastening the day when home robots will be a reality. Toward that end, Willow Garage is providing versions of the PR2 (which reportedly cost $500,000 a copy) for free to researchers at universities and other robotics labs.