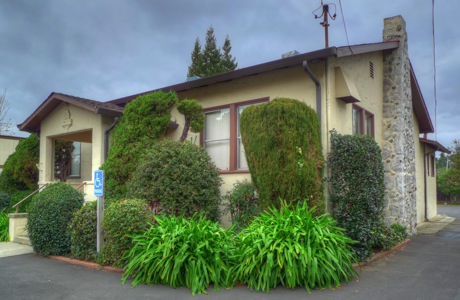 If you’re an Italian-American living in the Menlo Park area, the place to be on the first Tuesday of each month is the Italian-American Social Club on Oak Lane. That’s the night dinner is served.

The original 33 members built their clubhouse on Oak Lane in 1929. At the time the area was still removed from downtown but now Draeger’s is only two blocks away. The clubhouse has a large room for meetings, watching TV, and can double as a dining room. In the back is a smaller room that has a bar that also is used on occasion for serving buffet meals. Outside there is a free standing kitchen and sheltered eating area next to several bocce courts. During warm weather this area can get pretty active. Several times a year there are special family nights, and for the past two years the club has staged a Super Bowl party.

Today the Club has about 144 members, many of whom are second generation and several of whom live in the immediate neighborhood. Pride in the Club runs high. If you search the Web for the club name, you will find that many obituaries for local Italian-Americans mention their membership in the club. Andriana Dioli is the club historian. He can tell you about which parts of the clubhouse were built by his uncle or by Carl Bianchini’s father or by other early members who left their mark. A full page (124) of Menlo Park: Beyond the Gate, the history of Menlo Park by Michael Svanevik and Shirley Burgett published in 2000, is devoted to the club.

Am pleased the Menlo Park Italian-American community is ‘alive & well’. 🙂

I am an Italian American living in Oregon. I have visited Italy and Sicily many times, and recently published a very original book dealing with Sicily. It may be viewed on my web site, at: http://www.sicilyupclose.com
It is available to all Italian American groups at a reasonable discount. Any questions, please feel free to contact me. Grazie, Bud

I am interested in becoming a member of the Italian Social Club of Menlo Park.

How do I do that?