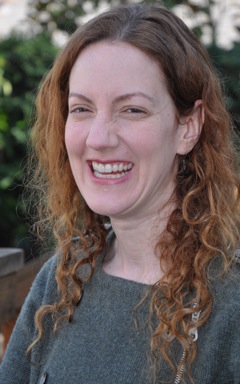 If you’re feeling blurry-eyed from staying up to watch the Olympic figure skating events, you’re not alone. Former competitive figure skater Sarah Granger, who’s covering the competition for BlogHer, is in the same boat. “It’s so frustrating,” she says. “especially because I’m on the West Coast. ”

The time Granger spends on the ice today is with her family. She competed as child and  adult but hasn’t done so in over a decade. “I took part in the nationals when they were held in Oakland in 1998 – that was fun,” she says.

Now the focus is passing on her skills; her four-year-old daughter just started skating independently, untethered from Mom. “I had my first good work out in ages thanks to fact that she’s on her own,” says Granger, who’s a member of the Peninsula Skating Club.

Granger moved to the Bay Area from Michigan and has lived in the East Bay and the City but always felt comfortable around Stanford where both her father and sister attended. She and her husband bought their first home near downtown Menlo Park and moved to the Allied Arts neighborhood after their daughter was born. “Our street has the best Halloween in Menlo!” she says.

She began her career in IT security and today juggles mom duties with writing and speaking engagements along with entrepreneurial pursuits. She co-founded SFBayStyle in 2007 and acts as publisher and managing editor. She’s also involved planning the Gov 2.0 Expo to be held in Washington, D.C. in May.

But first she has to get through a few more late nights watching the ladies compete at the Olympics.