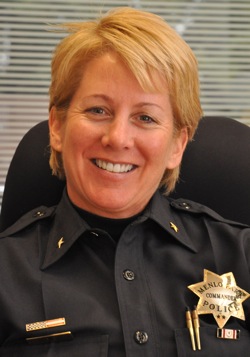 Ask Menlo Park Police Department Commander Lacey Burt what makes a successful law enforcement officer today, and you might be surprised at the answer.

“Problem solving,” she says. “The role of the police is changing. We’re not just focused on crime and law enforcement. We need people who are more thoughtful and oriented toward problem solving.”

As Commander, Burt oversees daily patrol operations as well as field training. She was with the Palo Alto Police Department for 23 years before joining the Menlo force in 2006. She’s worked hard to prepare for her current responsibilities, earning her B.A. at Menlo College and a Master’s in Emergency Personnel Management from Long Beach State. “These days it’s rare for anyone to make lieutenant and up not to have a master’s degree, given the nature of police work.”

Burt particularly enjoys the field training part of her job. “It’s fulfilling to take people out on patrol and teach them to be cops.”

As for MPPD’s new Smart Cars, she says, “There would be more of them if it were up to me!”