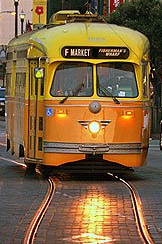 InMenlo sources have confirmed that the City of Menlo Park has been granted an $11.1 billion Stimulus Grant to construct the controversial low-speed rail link from the CalTrain Station to the Peet’s Coffee outlet at University and Santa Cruz.

The new line is planned to whisk commuters at 3 M.P.H. (the speed determined after a 5-year study  by a citizens’ ad hoc committee) down Santa Cruz Avenue and back. The new streetcars, purchased from a used car lot in St. Louis, will be refurbished at the Tesla Motors dealership on El Camino and will be the first battery-powered trains in America.

“We looked at wind-up motors, but we weren’t sure that busy residents would have time to wind the motor for every trip” said Menlo Mayor Rick Kline. Instead, the new trains will each use 44,000 rechargeable penlight batteries hooked up to a modified Tesla Roadster motor, according to Tesla spokesman Thomas Edison.

The trains will run down parallel tracks on Santa Cruz Avenue, which will mean permanently closing the street to cars after the 12-year construction project is done. “After 12 years, people will forget cars ever went down Santa Cruz, so we don’t think that’s going to be a problem,” said the mayor.  Merchants generally welcomed the project, saying the influx of construction workers would likely provide more foot traffic than they now see.

The plans include a self-service train turntable at the intersection of El Camino and Santa Cruz, with El Camino’s daily 200,000-car flow re-directed “safely and sanely” through local neighborhoods.

I would like to add that the Illinois Railway Museum may have several of the old North Shore Electric Line “Green Hornet” cars available, although these were quite speedy. They used overhead electric lines, but I’m sure extension cord reels could fill in if needed. No turntable would be needed; just turn the non-polarized plug around to go the other way.
I know somebody who knows somebody, if interested.