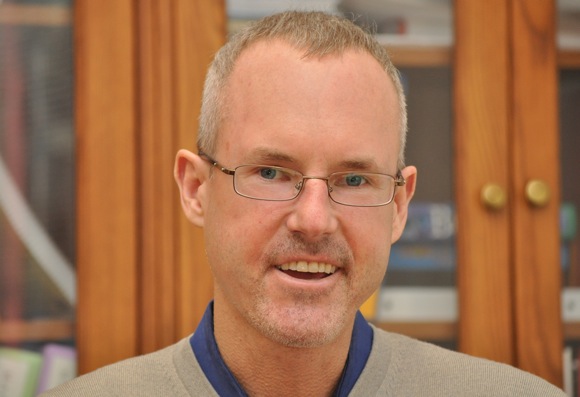 Passion emanates from the office of Menlo-Atherton High School Principal Matthew Zito. You can feel it even before he utters a word, and when he does speak – often in the form of proclamations – the zeal for both students and school is palpable.

“Dirty, dusty or broke drives me nuts!” he exclaims. When he joined M-A as vice principal six years ago, he found broken furniture, pealing paint and a campus that people had gotten used to being in a state of disrepair. “That’s no longer true,” he says, noting that the re-building efforts are nearing completion.

The most visible element is the Center for Performing Arts that opened in October. But there are other signs – fresh paint, shiny lockers, and new walled fencing along Middlefield Avenue that replaces chain links, which he characterized as “a community eyesore.” The last project will be the construction of a five-classroom Media Arts building which will start in October and take about 12 months to complete.

Thanks to the influence of another principal, Zito has known he wanted to be a teacher since he was in high school. He taught English before assuming administration positions.

When he was appointed M-A’s principal three years ago, his primary objective was to improve the instructional experience for students. And while pleased with the more attractive physical plant, he reiterated that a “cracker jack staff” always takes precedence over buildings.

“At M-A, we serve two very demanding populations,” he says. “One is made up of students who are under prepared for high school. The other consists of students – and their families – who have made a conscious choice to attend M-A [rather than a private school].”

Zito says the classroom teaching staff has been strengthened over the last five years. “We’re like a large muscle car,” he says. “We really need to be firing on all eight cylinders.”

To raise teaching standards, he says he set clearer expectations about requirements – and saw the staff respond. In addition to the teachers willingness to adapt, he credits the support he’s received from what he calls “a great management team.”

The high school also continues to garner parental support – through the PTA and Foundation – as well as support from the local community. “Sometimes it’s a challenge to get everybody on the same page,” he says, “but we’re very fortunate to have this kind of committed leadership and people who really want to understand the needs of the school.

“M-A is a really an inclusive place. There is a place for everyone, and something for everyone here. That’s the message we want to get out.”

For a student perspective on their principal, check out The MArk. To visit Menlo-Atherton High School, stop by the Open House on Wednesday, April 7 from 6:30 to 8:30,