In rehearsal with the Stuart Highlanders Pipe Band 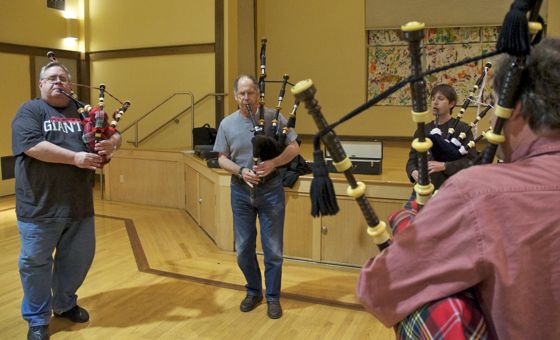 From the hills of far west Menlo come the sound of bagpipes, at least on Wednesday evenings when members of the Stuart Highlanders Pipe Band rehearse at St. Bede’s Church. The Band, which is a non-profit educational organization, was formed in 1958 – and President Bruce Campbell (pictured top, far left) has been with the group for 45 of those years. “No one else will have me,” he quips. 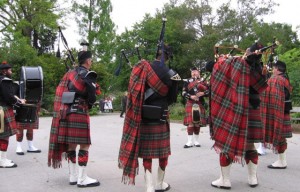 Rehearsal begins with Band members sitting around a table each playing a tuner, which to the uninitiated ear sounds a bit like wimpy pipes – the lilt without the gusto. There’s also fellowship – talking about what’s on their minds – and time to learn new music, directed by Pipe Major Joe Roberts. After about an hour, out come the bagpipes, with Joe spot-checking each musician with a modern day contraption – an electric tuner. “Previously, you had to have your ear trained to find out who was in tune and who was not,” he explains.

According to Secretary/Treasurer Walt Innes (pictured top, middle), “The Band is glad to be hired and glad to give lessons.” They’re currently particularly interested in giving snare drum lessons.

Photo of band in rehearsal by Chris Gulker