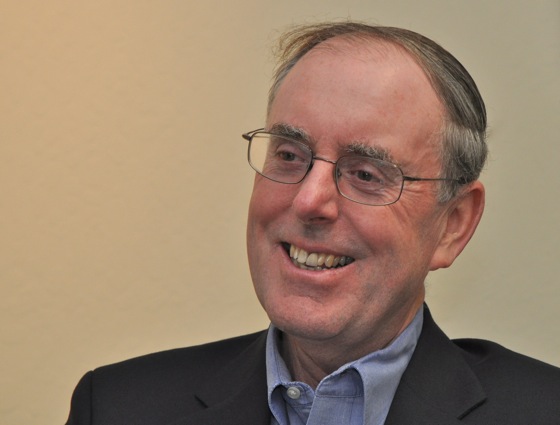 As Menlo Park resident Elton Sherwin recounts it, an epiphany led to the writing of his second book, Addicted to Energy: “I was sitting in an adult Sunday school class listening to a lecture on Old Testament prophesy and the speaker was saying, ‘Most of us think of prophecy as fortune telling.’ And I thought, ‘That’s what it is, isn’t it?’  And he said, ‘That’s not actually what it is – it’s speaking the truth to a leadership group that doesn’t want to hear the truth.

“Out of nowhere came this thought: Well, the truth our leadership doesn’t want to hear is that we’re melting the polar ice caps. And I just felt this nudge – ‘You can speak up  as clearly as anybody else.’ And that was really the germ that started the book.”

Sherwin, who is Senior Managing Director of Ridgewood Capital, will be talking about America’s energy addiction Sunday morning, April 25, at Trinity Church (Ravenswood and Laurel) in Menlo Park. The program, which begins at 9:30 am, is free and open to the public.

“The focus on Sunday will mostly be on what individuals can do to reduce their carbon footprint,” says Sherwin. “What are the seven things that really define the environmental impact of living in Menlo Park and Atherton?  We have a very distinctive carbon footprint that’s a little bit different than the rest of the country because we’re more affluent. And then I’ll spend a little time on community initiatives, what we need to do collectively.”

He cites, as one example, food waste, explaining: “It turns out that food waste turns very quickly into methane and gets up into the atmosphere and melts things and heats the planet.  All of the trucks and buildings used by the city of Menlo Park  have a smaller environmental footprint than the food waste out of the city. When you think about it, between the restaurants and private homes, there’s a lot. So that’s one area we can work on collectively.”

Sherwin is a master communicator, employing an energizing, inspiring – and never boring – manner to talk about the things we can do to make a difference . He shows us bite-sized chunks of action in  Addicted to Energy and makes it real by recommending personally tested products that have helped reduce his home electric bill by over 40%  in the last two years. Think of it as a full throttle environmental epiphany