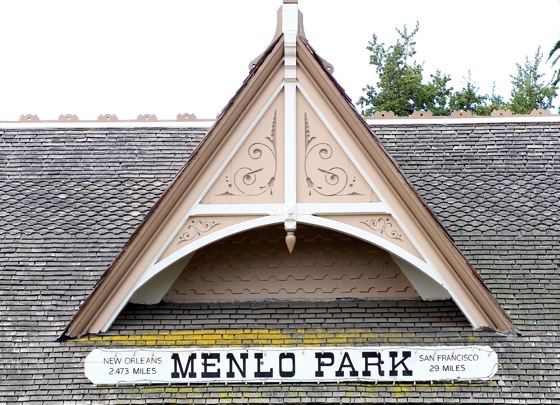 A couple of months ago, former local resident Corry Arnold (who blogs about the Grateful Dead and other once Peninsula-based musicians), sent an email inquiring about a Menlo Park train station sign that displayed the mileage to New Orleans. Wrote Corry: “Were you aware of a sign on the railroad tracks in Menlo Park, opposite the Menlo Park station, that said ‘San Francisco-30 miles/New Orleans 2473 miles’? Apparently the sign was there from pre-WW2 (possibly pre-WW1) until at least 1990…

“…I found about it from reading a book called West Coast Jazz: Modern Jazz In California 1945-60, by Ted Gioia (1990).  According to the author, even the Menlo Park city manager (as of 1990) did not know why the sign was there. Now, as it happens, for many decades New Orleans was the Southeastern terminus of the Southern Pacific Line, so the sign was accurate, but its odd that New Orleans was shown instead of San Jose…Is the sign still there? And – transit history aside – why was it in Menlo Park? Did every station on the SF/SJ line have an ‘SF-New Orleans’ sign at one point, and only Menlo Park’s survived? The jazz book, excellent as it is, only uses the sign as a metaphor and does not pursue the question of why it was there.” 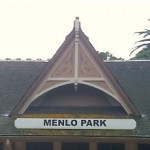 That question sent your InMenlo team scurrying to discover if the sign still existed. It did as of October 16, 2007 when Scott Loftesness took a photograph (above). But sometime between then and now, a new less “old timey sign” (inset left)  took its place, creating a new mystery. Given the Menlo Park train station’s status as a National and California Historical Landmark, why was the sign removed?

As for Corry’s question as to why it was there in the first place, his instinct about its relevance to the Southern Pacific train line is correct. We stopped by the Menlo Park Historical Society whose archives unearthed an article by Mary Madison from the August 21, 1989, edition of the now defunct Peninsula Times Tribune.

Robert Hoosan, a consultant for the Department of Transportation [at the time of the article’s publication] told the paper that the sign is probably a replica of the type of sign that was hung from many original depots when San Francisco was the hub for all Southern California Pacific lines and New Orleans was the ultimate destination for the only SP transcontinental line through the South. Somewhat oddly, given the sign, Hoosan said the train probably stopped in Palo Alto, not Menlo Park. 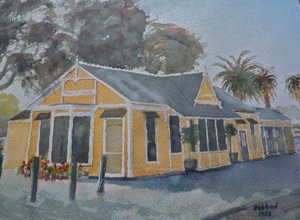 Scott’s photo is proof that the sign survived the renovation of the train station in 1987. That’s when the clock tower and J.B. Blunk’s abstract redwood sculpture were added. The station’s original exterior yellow color (shown in a watercolor painted by John Hubbard in 1982 – left) was also changed to its current tan.

A very interesting posting. It would indeed be interesting to know what happened to the older (original?) sign.

A fantastic photograph–its amazing that the sign survived into the 21st Century, outliving the Southern Pacific itself by 20 years.

I have discovered that prior to 1892, the San Francisco local train began and ended in Menlo Park. The train to Mayfield (the next stop South) was on the line running all the way to San Jose.

SP Treasurer Timothy Hopkins had an estate in Menlo Park, and of course SP President Leland Stanford was often at his farm in Palo Alto. Thus the sign indicating the farthest reach of the SP Main Line may have been for their benefit, so to speak, as it would have been the local stop for the most important men in SP.

Stanford University had opened in Fall, 1891, and after 1892, the local train to San Francisco moved one stop down the line and began and ended in Palo Alto. Hopkins had resigned from SP by this time, and Leland Stanford spent much of his time in Washington, DC as California’s US Senator.