Get set to watch the Menlo Park Legends in action

After just one season of play, the Menlo Park Legends are a hit. Their first practice of the season – open to the public – is today (Saturday 5/22) at Menlo-Atherton High School. Pitchers and catchers report at noon, followed by the rest of the squad to 1:30 pm.

The semipro baseball team founded last summer by M-A alum David Klein (pictured below) sometimes had to scramble for players in its first year. Leading up to the 2010 season, Klein has actually had to turn people away. Four Stanford players will be Legends — and Klein could have had even more, if not for a league rule limiting each team to four players from any one Division I school.

“I’m expecting, hoping, trying to win the league, to be honest,” Klein said. “I’d like to give us the opportunity to go to Wichita and play in Kansas for a national championship. This is a big step for a second-year team. The rest of the teams in this league have been around for 30-plus years.”

Klein will hold tryouts for the five spots still left. He expects 50 to 60 players to show up. The Legends will even welcome players from out of state who will stay with a host family. (He’s still searching for more host families.) Klein plans to try to get newly retired Major Leaguer Eric Byrnes involved — somehow. 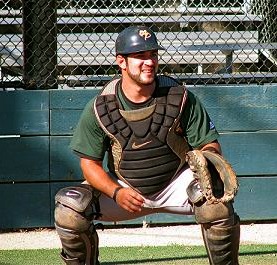 Fans of last year’s squad will be glad to know a few familiar faces will be returning. Klein will again catch and DH, perhaps becoming an even bigger force now that he has a small army of interns to take care of all the everyday minutiae he had to worry about last year. Pitcher Kyle McCabe is returning, along with Skyline’s Jeff Clegg and Adam Costello, a pitcher and outfielder respectively. Columbia pitcher Max Lautmann will complete the quintet.

The Legends will again offer camps for local youngsters. Already, Klein has as many kids signed up as he did all of last summer.

“The whole reason I do this is to have a community-based baseball organization where people of all ages can get involved,” Klein said. “It’s fun to be out there with these kids taking them through the basics. It feels good, the players like it, it keeps them busy during the day.”

The Legends begin play on Sunday, June 6, with a doubleheader against Sacramento. Here’s their complete schedule.