Find out what’s under your skin – free documentary screening 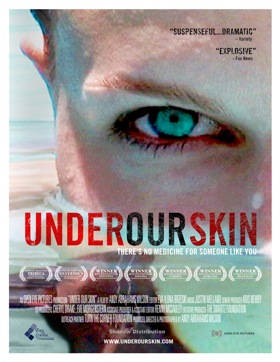 A riveting thriller — about Lyme disease? See for yourself at a free screening of Under Our Skin on Saturday afternoon at Trinity Church. The film is described as “a gripping tale of microbes, medicine, and money, which exposes the hidden story of Lyme disease and reveals how our healthcare system is failing to address one of the most serious and mysterious illnesses of our time.”

The documentary unfolds through the deeply moving stories of a diverse group of patients, including a park ranger, U2 roadie, new mother, ballet dancer, and major league baseball player, as they struggle to make sense of the disease amidst a challenging healthcare system.

Under Our Skin has received wide critical acclaim, winning more than 20 top film festival awards. Earlier this year, the film was short-listed as an Academy Award semifinalist for Best Documentary Feature.

After the screening, local Kris Newby, the film’s Senior Producer and a Lyme disease expert, will conduct a Q-and-A with the audience. The screening will take place on Saturday, May 29 at 1:00 pm in Angus Hall on the Trinity campus, located at 330 Ravenswood Avenue.