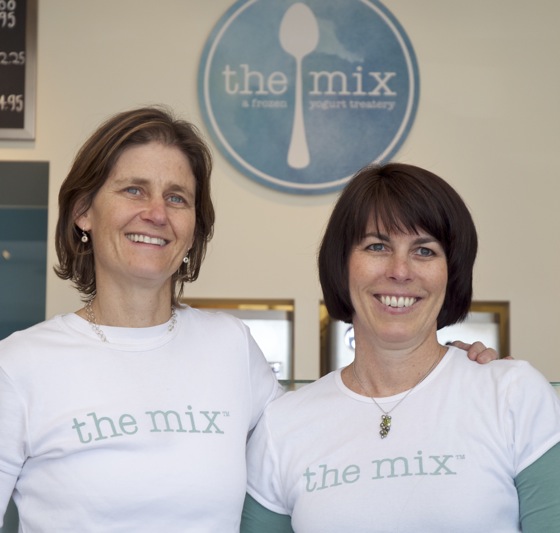 A new craze is sweeping Menlo – one that’s creamy soft and mostly self serve. Three new frozen yogurt shops have opened  since the beginning of the year,  joining stalwart Yogurt Stop on El Camino.

Only one is locally owned, The Mix, which opened in February on the Alameda de las Pulgas and is owned by Susannah Albright and Jamie Schein. “We felt there was a need for a family gathering spot that offered healthy treats,” says Susannah (pictured left). Both Susannah and Jamie are Menlo residents and active in their respective school districts, Menlo Park Elementary and Los Lomitas.

Menlo’s other two new yogurt shops, unlike The Mix, are self serve, which is a boon to some yogurt aficionados and a bust 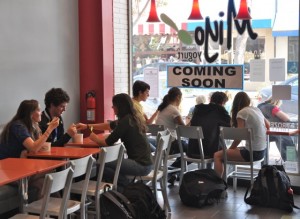 to others, with some complaining that the yogurt comes out frozen initially but  melts too quickly. One shop, MiYo (pictured left) is located on Santa Cruz and seems to attract the after school senior high crowd. The other, WildBerry Yogurt in the Sharon Heights shopping center, gets pluses for ample free parking and bright decor and some criticism for its one-size-fits-all cups that can be costly when filled and paying by the ounce.

Photo of Susannah Albright and Jamie Schein by Chris Gulker

The Mix is The Place! Wonderful yogurt and I love the service too. Kudos to Jamie and Susannah.

Fabulous organic yogurt where you “mix-in” the goodies and turn simple yogurt into a gourmet delight! Convenient location for a daytime treat or an evening stroll destination. Thanks Jamie and Susannah 🙂