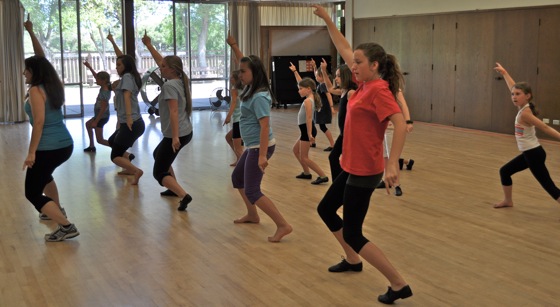 For Maryanne Fernandez-Richardson and Dani Fernandez, the creative team behind the Dance Expressions program, this is the week it all comes down to. It’s the exhilarating — and a little frantic — build-up to the year-end showcase, which features more than 150 students from their classes at the Burgess Recreation Center.

While the primary focus are the dress rehearsals with the girls and boys ages 5 to 18, the mother-daughter team also have to tend to the more mundane details of producing a show at the Menlo-Atherton Performing Arts Center: selling tickets, coordinating volunteers, creating the program, and even setting up a temporary dressing room to accommodate all the kids.

“Right now our whole lives are just dance. We enjoy it so much,” says Maryanne, who has taught dance in Menlo Park for about 20 years. Maryanne grew up in Menlo Park, attending Nativity, then Menlo-Atherton High School, and she enjoys having the opportunity to teach the children of some of her former Menlo schoolmates.

The show’s theme is No Limits, which Maryanne elaborates on, “Reach for the sky. Let everything shine that you have.”

No Limits will feature lively numbers by students from each of the 19 weekly classes that the Maryanne and Dani teach. Expect to see mostly jazz, with a little bit of hip-hop and even a Bollywood routine. The finale, choreographed by Dani and set to “Fame,” promises to bring down the house, featuring many of the dance groups performing together.

There are actually two shows on Saturday, June 19: The 1:00 pm one includes the younger dancers and is attended primarily by families, while the 7:00 pm show highlights the older dancers and is open to the community. Tickets can be purchased at the door for $15.

Next up? Summer dance camps

Once the curtain closes on Saturday night, Maryanne and Dani have barely a day to recover before the next big project. Starting on Monday, June 21, Dance Expressions will begin its summer program, with week-long camps for every age group—and there is still space available. For more details, see the Dance Expressions website, and to enroll in a camp, do so through Menlo Park’s online registration system.