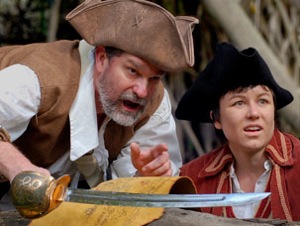 This coming weekend – June 25-27 – is the last to enjoy Festival Theatre Ensemble’s performances at Mid-Peninsula High School in Menlo Park. The Friday through Sunday lineup, in order, is Treasure Island, The Importance of Being Earnest, and The Taming of the Shrew. All shows begin at 8:00 pm and are free of charge (donations accepted). It’s an outdoor venue, so dress warmly.

InMenlo caught up with FTE producer Jennifer Selden, who provided some background on the company and its mid-Peninsula performances, in particular its association the now-defunct Menlo Players Guild:

“Although we have been performing at this festival since it’s inception as The Burgess Shakespeare Festival in the old Burgess Theater, we have only recently taken over full production since Menlo Players Guild closed. We just couldn’t see this wonderful free venue close!

“We enjoyed a wonderful working relationship with MPG over several years. We had some overlap with actors and at one point shared a board member. We had done a few Shakespeare plays for them as fundraisers, and co-produced a few more before the city decided to tear down Burgess. Without the theater they called home, MPG was left floundering.

“We continued to bring the Shakespeare festival up to Menlo each summer, and they continued to perform other shows in various places, like the MP Community Center and a court house in Redwood City, while trying to secure a permanent indoor performing venue. Unfortunately, those efforts were unsuccessful. For the last few years their entire season consisted of the festival that we were bringing and as a result, their board made the very difficult decision to fold MPG after nearly 70 years.

“Menlo Park had been the home of one of the longest running community theater companies in the Bay Area. If only the city considered more carefully the impact tearing down the theater would have.

“When we finish in Menlo Park we strike the entire set, stage and all, and move everything in three 24-foot trucks down to Los Gatos for the Los Gatos Shakespeare Festival.”