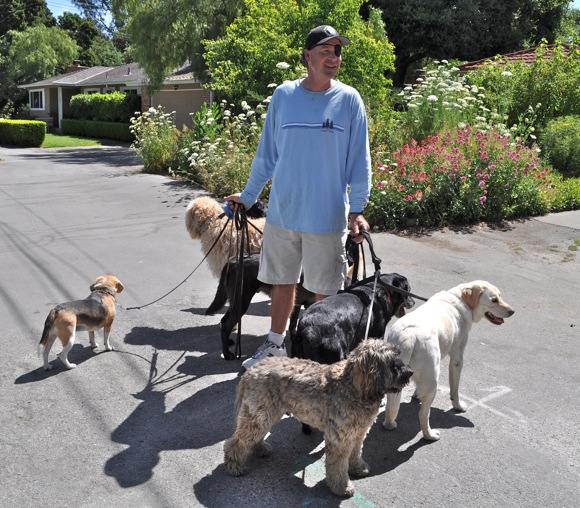 Some posts can’t help but be personal. Sometime during the summer of 1994 our young Australian Shepherd female – in temperament a mixture of tomboy and hussy – fell “in love” with a pup about her same age. That no other dog had any interest in taking on Rex, a rather formidable, 100-pound Argentine Pit Bull, didn’t bother Cassie one bit. And what could Rex do but be the kind and patient guy he was while Cassie herded him around the school yard and jumped all over him.

These encounters led to conversations with Rex’s owners and their son Phillip. The latter seemed to have a great way with animals and we inquired if – being as Cassie and Rex got along so well – he might be interested in doing some dog walking while we were on vacation. We’re not sure, but we think we just may have coincidentally launched Phillip on his way to becoming one of West Menlo’s premier – and most in demand – dog walkers.

We happened to run into Phillip recently and he gave us the news that they’d put Rex down just a few days earlier. (We lost Cassie in 2008.) From the looks of things,  his dog walking business continues to thrive. Even with a half dozen or more dogs, he manages to have them all walk along in front or by his side, no dog straining on the leash or trying to hurtle over a fellow canine. His secret: “I know the dogs and talk to their owners. Then it’s easy to put compatible groups together.”