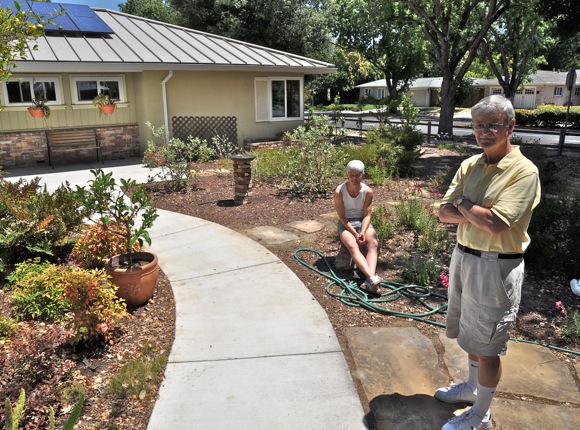 Jim Greer cites a parsimonious nature for his interest in a green lifestyle. “I hate to pay for things when I don’t have to.” Jim confides. His home’s distinctive steel roof (a local landmark until his neighbor got one, too) reflects heat, will last “forever,” recycles easily and supports a pod of solar cells that have reduced his electric bills below zero. His yard features low-water, low-maintenance landscaping while the house is equipped with state-of-the art low-energy lighting, cooktop and Energy Star appliances, among other features that reduce energy use.

Jim routinely gets 50 MPG in his Honda Civic Hybrid, and recently converted his veteran Mercedes station wagon to run on biodiesel – fuel made from recycled cooking oil from local restaurants. Not content to merely live green, Jim also works green – he’s a VP at CalStar, a startup that makes bricks and pavers using 85% less energy (and thus emits 85% less CO2) than traditional makers of building materials. With partner Tracy Stewart he oversees a veritable showplace for green living.

Indeed, it was no great surprise to learn that Jim haunted local home supply and hardware stores until he found, in a dusty storeroom, one of his two prized possessions – the clothesline that now graces his back yard. “The clerk said he hadn’t sold one in 15 years” says Jim.

His other prized possession? The bright yellow Lotus Élan roadster that shares the garage with his Honda. “It gets 27 mpg highway,” says Jim, grinning.