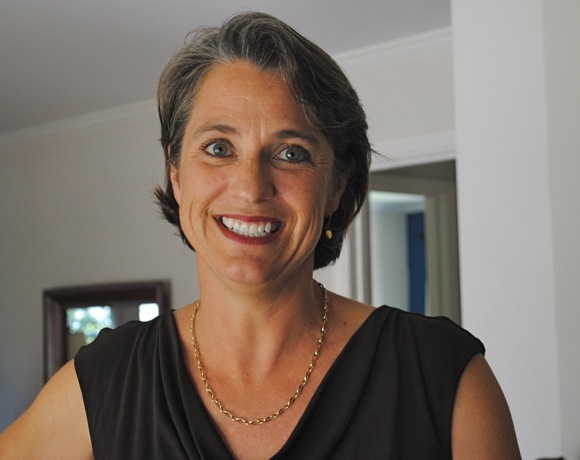 Before we settle in to talk, Carolee Hazard asks if she can do one quick thing: Check the status of the 93 Dollar Club’s Second Harvest donation page. Given the flurry of activity in the past few days, she could literally reach her $93,000 fundraising goal at any minute.

The page refreshes and it’s holding steady at 92% — or $85,492.06! It’s hard to believe that just a year ago, it all began with a spontaneous act of kindness at Trader Joe’s in Menlo Park. What followed was a Facebook-driven fundraising effort for Second Harvest Food Bank that has ebbed and flowed since last August when the giving movement was born.

Right now, things are definitely on an uptick, thanks to a challenge grant announced this week, the gift of Los Gatos-based Leo and Donna Boger. Their daughter Kristin Gershfield, who lives in Menlo Park and knows fellow resident Carolee through their kids’ school, shared the 93 Dollar Club story on a recent family vacation. The Bogers, supporters of Second Harvest who appreciate how efficiently the nonprofit is run, pledged to match every dollar donated until the goal is met. So, though the Web page total shows about $7,500 to go, the amount is much less than that thanks to the grant.

Carolee, a scientist, is quick to point out that the grant really makes a difference by the numbers. “A $93 donation becomes $186, and Second Harvest provides two meals for every dollar donated. That’s 372 meals — or enough to feed a family of four for a month.”

How it all got started with a boost from Facebook

The 93 Dollar Club story — which you may recall from last holiday season when it received considerable local media coverage — goes something like this: Last summer, Carolee was in line behind Jenni Ware, a complete stranger who frantically realized she’d lost her wallet. Carolee paid the $207 grocery bill, and Jenni promised to send her a check.

The next day, not only did she receive the check, but it was for an even $300. Turning to her Facebook friends, Carolee asked others what they’d do with the extra $93.

A friend suggested she donate it to a food-related charity — an idea she really liked, pledging her own $93 in matching funds. She wasn’t alone. Back on Facebook the next morning, the donations had reached over $1,000, as friend after friend also pledged to donate $93 and reposted the story to their Facebook pages.

“No one has ever asked anyone to give money. It’s been people on their own, who’ve seen what’s happened, and they want to be a part of it,” explains Carolee.

A year of living generously

The past year has been quite a ride for Carolee and her supportive husband Jon, who encouraged her to put aside other work for a while to see where this would lead. Nor did he flinch when she announced the $93,000 goal by the one-year anniversary, August 11, 2010, when the total raised at that point was only $23,000.

Carolee recounts some of the more goose-bump inducing donations: the neighborhood child who donated 93 cents of her allowance, the single mom on the tightest of budgets donating $9.30, and the holiday party guest who pledged $9,300 in honor of his late mother who stretched what little they had to feed those who were hungrier.

And the momentum continues. Next week, Carolee and the 93 Dollar Club will be part of the launch of the new Facebook Stories application. In September, look for the story to be featured in the national magazine Woman’s World.

What’s next? “My pie-in-the-sky wish is that someone — I have no idea where it would come from — will step in to match the $93,000. That would be like the bow on top of an amazing present,” says Carolee.

To learn more about Carolee and Jenni’s story, see this video produced by Storytellers for Good. To join the 93 Dollar Club and take advantage of the new challenge grant, visit its donation page or visit the group on Facebook to keep up on the latest activity.