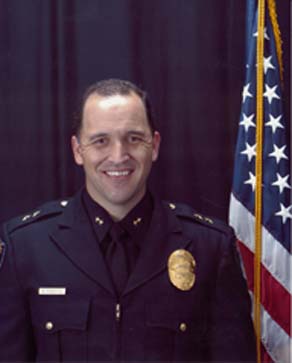 Bryan Roberts will become Menlo Park’s Police Chief on September 7, pending a background check and other requirements for public safety officers, according to Menlo Park City Manager Glen Rojas, who made the announcement today. Roberts is currently a Commander for the City of Citrus Heights, where he has worked since 2006.

The City initiated a nationwide search for a new chief in March shortly after Chief Bruce Goitia announced his retirement. Roberts was selected from a pool of over 30 candidates based on a selection process that included interview panels of community representatives, internal staff, and local police chiefs and city managers. “We are fortunate to have attracted a highly qualified candidate with a skill set and experiences that will serve Menlo Park well as he leads the Police Department into the future,” said Royas. “Bryan is known for high visibility in communities where he has worked, as well as his engagement and team orientation with officers at all levels. These were the most important aspects of a new chief mentioned by the department and community members.”

Roberts joined the Citrus Heights Police Department in 2006 as a Commander. He previously held the positions of Corporal, Sergeant, and Lieutenant with the City of Ventura, where he worked for 20 years, beginning in 1986. Prior to becoming a police officer, he was a United States Marine. His police work experience includes investigations, narcotics, SWAT, training, youth and family services, internal affairs, and management/administration. Roberts holds a Bachelors Degree in Business Management from Azusa Pacific University and a Masters in Public Administration from California State Northridge.  He is currently attending the Naval Postgraduate School for the Center of Homeland Defense and Security Masters Program.