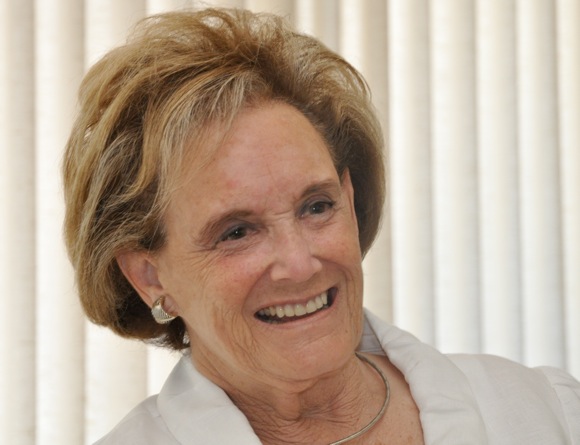 Betsy Glikbarg had a critter problem and no, it didn’t involve a 1,500-pound equine as people who know the longtime chairman of the Menlo Charity Horse Show might suspect. “I have horse cookies in my carport and the skunks and raccoons are getting into them,” she explains to her InMenlo visitors.

Leading up to the 40th edition of the show, which opens on Tuesday (8/10) and runs through Sunday (8/15) at the Menlo Circus Club, there’s not a room in her Atherton home that doesn’t have horse show related stuff. While the show has a professional manager and volunteers that number 150, it’s Betsy who is recognized as its guiding and sustaining light.

About 20 years ago, Betsy stepped down as the event’s chairman, or at least she tried. “Two people were in line to take over and I even had a retirement ceremony,” she says. “But even though they were best friends, they couldn’t agree on anything. The manager kept calling me for clarifications, and I got it all back in the middle of the show.”

Betsy is particularly proud that over the years the show has raised millions of dollars for the Vista Center for the Blind and Visually Impaired in Palo Alto, including $440,000 last year alone. That is made possible in part by the show’s sponsors, which this year number an all time high of 92, much due to Betsy’s genteel arm-twisting. “We beg, borrow and steal,” she says. “We don’t pay for anything unless we have to.” 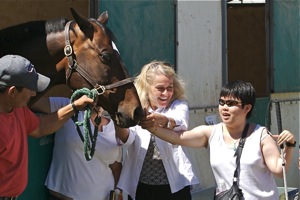 Vista is noted for its efforts to help the blind function independently and the organization trains clients in their home and office environments. One of the show’s committee members is a horse trainer, who herself is blind, and Vista clients are brought to the Circus Club barns to meet some of the horses participating in the show.

The six day, “AA” rated show focuses on hunters and jumpers competing in Olympic-style, open-field jumping in three arenas. Highlights include the $40,000 Menlo Horse Show Grand Prix at 6:00 pm on Saturday, Aug. 14 and the crowd-pleasing children-under-six lead line class at 1:00 pm the same day. New this year is the the Windy Hill Larry Mayfield Memorial Ride and Drive Class, which is scheduled for Wednesday evening (8/12) on the grass jumper field at 6:00 pm. In this class, riders and horses compete over fences. At the conclusion of the jumping, the riders dismount and hop on Segways, which they ride over a driving course.

“I think this is one of the few events that the whole community gets behind,” says Betsy, who has owned but never shown horses. “It’s great for kids because they can see the horses close up.”

A party (and benefit) honoring Betsy for her 40 years of service will take place tonight. “There are five us who’ve been doing this for 40 years,” says Betsy, referring to co-founders Nan Chapman, Nancy Parker, Nancy Robinson and Jane Yates, all who still actively participate. “I think we all have the same jobs. Who would have thought? It’s rank insanity!”