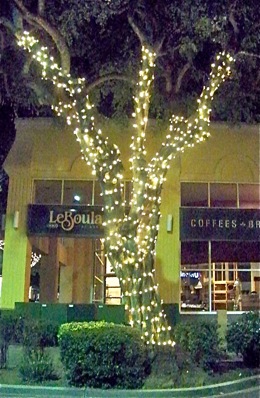 Like many Menlo Park residents, Ernst Meissner is looking forward to tonight’s Downtown Summer Block Party. But more than the music, food, or family fun, it will be a lesser known tree-lighting ceremony that will mark the evening for Meissner. Scheduled at around 8:00 pm — when it should be sufficiently dark — at 773 Santa Cruz Avenue (the location of the old Menlo Camera Shop), the event is the culmination of the Chamber of Commerce’s Downtown Feature Tree Project. Meissner, who will preside at the event, is Chairman of the project and has been shepherding it for more than three years.

The goal of  the beautification effort, which began in 2007, has been to replace the assortment of unsightly and energy-hogging uplights on Santa Cruz Avenue with LED-illuminated trees. The group dubbed these  “feature trees” because they would serve as focal points along the downtown stretch (as can be seen in this photo of one of the trees). The inaugural tree was lit in September 2008, followed by six more in a pilot in June 2009, and then all but the last one in June of this year.  Tonight, that last one will be finally lit.

A Community Tree for a community-based effort

With contributions ranging from one to hundreds of dollars, Menlo Park residents and businesses have funded the project and ultimately set the pace for how quickly it was completed. In fact, it was at this summer’s first block party in June when Meissner decided to more openly solicit funds to light the last of the 22 Feature Trees. And it worked — garnering enough donations to light the tree, known as the Community Tree, as well as pay for other project costs.

Meissner, a 40-year resident and retired architect whose business was based in downtown says, “Completing the project makes me very happy. The Feature Tree Project accomplishes three, important downtown objectives.” The first, says Meissner, is creating a more attractive nightime ambience. Second, it replaces the obsolete uplighting, which will save the city money. (The project replaced approximately 90 uplights that are 100-watts each, with 22 trees that require only 20-watts of lighting each.)  And the third? “It reinforces Menlo Park’s identity,” he concludes.