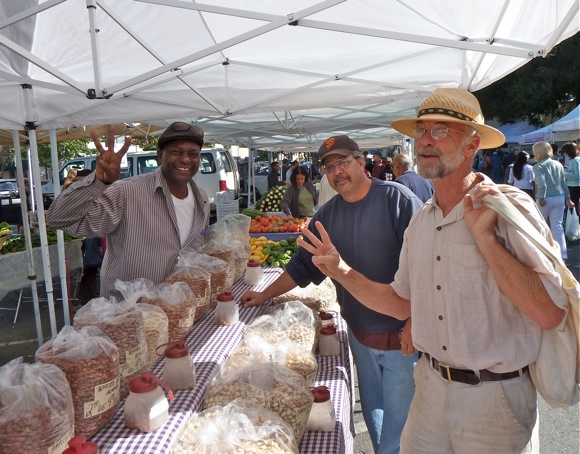 According to the the vendor’s website: “The Winters Fruit Tree business began during the 1930s by our grandparents in the Santa Clara Valley as a small farm selling mostly cherries and apricots to local food processors. With the urban growth of the Santa Clara Valley, we relocated to Winters in the Sacramento Valley in 1968 where we began to concentrate on the drying of fruit, mostly apricots and prunes, under the name of The Fruit Tree. By 1969, our father opened a year-round fruit stand on State Highway 128 where we sold our dried and fresh fruit. With the development of the stand, we began growing and selling other products such as almonds, pistachios, and walnuts.”

This morning the banter revolved around the number of “nuts” present. There were self-described  Chocolate Phil and Vanilla Phil. And then a Fruit Tree customer raised his hand, declaring, “I make three!” Nuts of the human kind, that is.