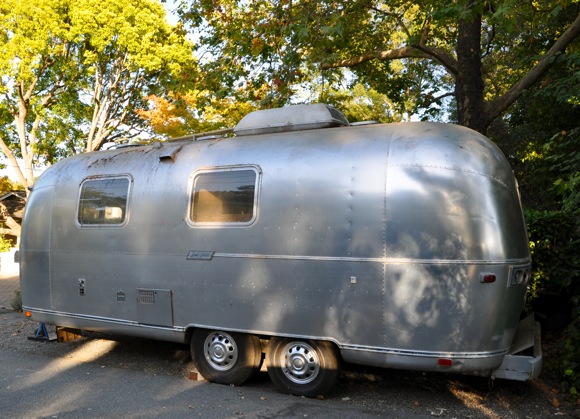 Well, of course not. Truth is we have a penchant for trailers (and large truck cabs) and finding two trailers parked about a mile from each other on Menlo Park streets presented a good opportunity to snap a couple of photos and dig up a bit of the lore.

We were able to verify that the Airstream spotted on Palo Alto Lane in Menlo’s University Park neighborhood is headed to a new home/location as its owners are moving. The Airstream story is kind of cool, being the brain child of one Wally Byam who started building trailers in his Los Angeles backyard during the Great Depression. A fun chronicle of the Airstream was put together by pianist Don Reasons, who also presents Airstream FM , an online “beautiful music” station. (Can’t make this stuff up.) An Airstream in still considered the luxurious recreational vehicle choice. 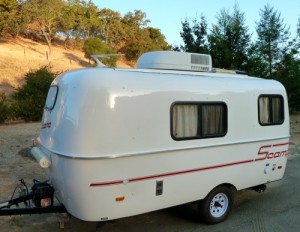 The Scamp (pictured left) appeared along the bike path adjacent to Alpine Road in Menlo Park a couple of weeks ago and was still there as of a few days ago. The company that makes this trailer brand was founded by Duane and Gerald Eveland along with their sister Gladys Coffland in the early 70s. The history of the Scamp is that of perseverance amidst hardship. The trailers themselves are known for being durable and lightweight.

Not surprisingly given the connected world of 2010, both Airstream and Scamp have loyal followers who travel together and swap stories online.