Folger Stable shines like new – and you’re invited to visit 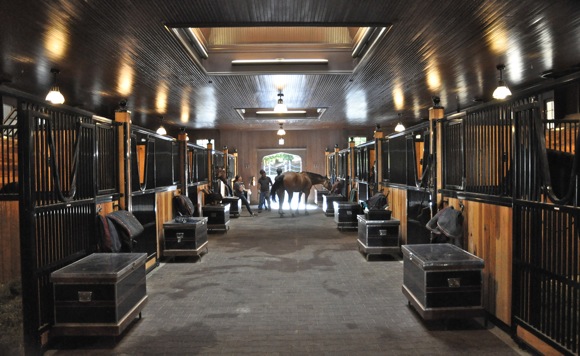 One of the jewels of the Peninsula’s Great Estate period of a century ago stood dying of benign neglect until a remarkable public/private partnership was formed. Now thanks to the efforts of the Folger Estate Stable Committee the barn built by coffee heir James Folger II has the look and feel of its glory days.

“I grew up riding horses in Atherton,” said committee member Nan Chapman, who still competes in pleasure driving with her 11-year-old Saddlebred mare, nicknamed Jackie. “This is a public horse boarding facility, and I’m hoping that its restoration will give kids today a chance to ride the beautiful trails that surround it.” 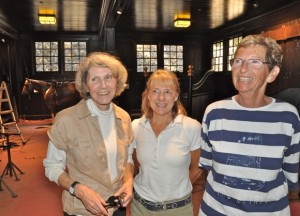 You can visit the Stable at a Community Open House on September 19 from 2:00 to 5:00 pm. They’re will be a host of family activities including pony rides, petting zoo, blacksmith display and docent guided tours. The Folger Stable is located in Wunderlich Park in Woodside; parking is limited so people are urged to carpool or cycle.

Susan Lang (left) and Jill Daly – pictured with Nan (right) in the Carriage Room – chaired the Folger Estate Stable Committee, which was formed in 2002.  Initial efforts included working with the County of San Mateo on a feasibility and master plan study and getting the Stable listed on the National Register of Historic Places, which was accomplished in 2004. The Campaign Committee raised $3 million for the renovation, which began in Dec. 2008. “Additionally, we’ve raised $850,000 out of the $1 million goal we set for an endowment,” said Susan. 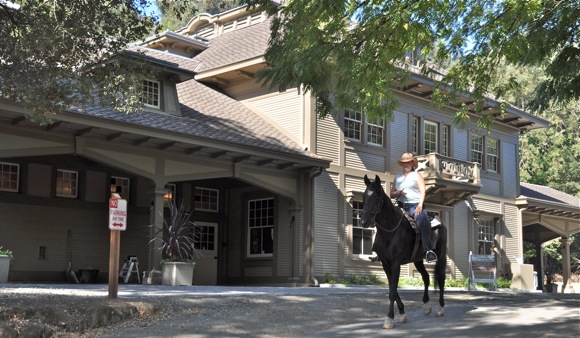 The Stable’s deteriorated state meant much work was needed to renew its luster. “For example, the Carriage Room had been converted to stalls and hay storage,” said Susan, standing the in the Room that will now serve as the Stable’s museum.

Menlo Park resident Barbara Slaton, who’d noticed the barn when hiking in Wunderlich, participated in the renovation’s early planning stages. “My interest was in saving a significant architectural specimen of the early 1900’s,” she said. “Susan was delighted that I cared and invited me to join the Committee to Save the Folger Stable, which was the precursor to the existing Committee. The Campaign Committee members were all so resourceful, energetic and devoted to raising the funds and choosing the very best architect and contractors to do the work to ensure that the Stable would remain a valuable asset for the Peninsula.”

James Folger II purchased the property in 1902 and engaged Arthur Brown, Jr. to design the estate’s buildings. This was one of architect Brown’s first projects; he later designed many San Francisco buildings, including the Ferry Building, Opera House, City Hall and Coit Tower. 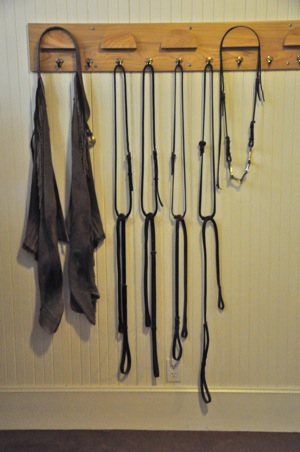 When the Folger family moved to the property,  Folger the businessman proved also to be an innovator. He harnessed the waters of nearly Alambique Creek to create the area’s first hydro-electric power. The original house (no longer standing) is believed to be the first on the Peninsula to be fully wired for electricity.

Today the Folger Estate Stable Historic District includes the Stable, which is 188 feet long and 75 feet wide and is built from redwood harvested on the property. It is called a “bank barn” because the hay was loaded onto the second story from the bank behind the barn. There’s also a Blacksmith Barn and Dairy House as well as extremely well-preserved dry stone walls built when Simon Jones owned the property in the late 1800s.

With its public open house just days away, the hard work of the Committee is coming to an end. “Now we really want to make sure the Stable is enjoyed by the whole community,” said Susan.

Photos by Chris Gulker with exception of photo of horse & rider in front of the Stable, which was taken by Linda Hubbard Gulker.