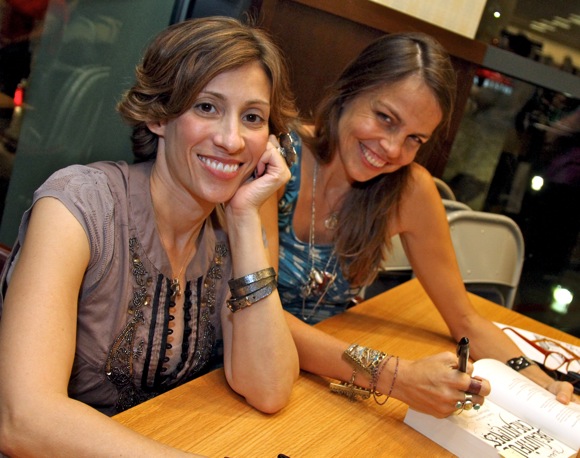 Melissa Marr, Kelley Armstrong, and Alyson Noël are headlining a book tour like none we’ve ever seen — and that’s saying something here, in Kepler’s backyard, where locals regularly get a chance to attend special book-related events and see the most in-demand authors. But what’s different about their Smart Chicks Kick It tour, which takes place Saturday evening at the Menlo Park Library, is that it’s completely author-driven (and funded).

Think about that for a minute: No publishing houses, no promotional budgets — and no one dictating the rules. The tour will hit 12 cities in 14 days and feature 18 marquee writers who currently dominate paranormal romance, the hot literary genre that includes the Twilight franchise.

Marr (below with microphone), best-selling author of the Wicked Lovely young adult (YA) series, who came up with the idea for the tour last year, says it was inspired by her experience doing events with other authors, including Armstrong (pictured with Marr). Not only was it a lot more fun to have the company, but it enabled them to share first-hand with their readers, the authors and books that they loved. And what they loved were books with strong female characters, which became the criteria for inclusion in the tour. They came up with a list of authors that spanned several publishers and included international best-sellers, as well as up-and-comers.

“Not only do they write smart women, they are smart women. Smart chicks kick ass is our banner!” exclaims Marr, who used to teach women’s studies before launching her literary career.

“It’s a message that we care deeply about and that we thought would really resonate with our fans,” says Armstrong, co-organizer of the tour and author of the Women of the Otherworld series for adults and the YA Darkest Powers trilogy.

For Alyson Noël (below) , author of 12 books including the Immortals series, connecting with fans was key: “Writing is solitary, so events like these with other authors and the crowd are really important.”

What’s also unique about their vision is that no two events will be alike. While Marr, Armstrong, and Noël will be at every tour stop, the line-up changes at each venue, from Austin to Ontario. This approach enabled them to include more authors and visit more cities. 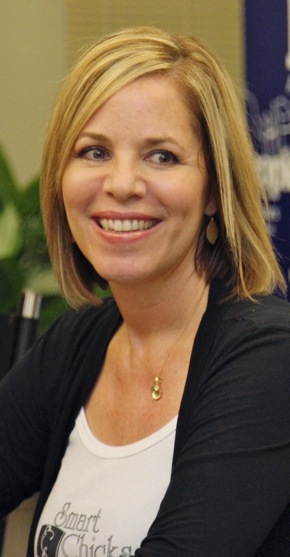 Here in Menlo Park, the tour line-up is rounded out by Melissa de la Cruz, author of dozens of teen and adult books, including the incredibly popular Blue Bloods series, as well as relative newcomers Kimberly Derting (The Body Finder) and Kami Garcia and Margaret Stohl (pictured top of post), co-authors of Beautiful Creatures.

“We are just appreciative to be with such incredibly successful and prolific women when we are starting out,” says Garcia, who along with Stohl never imagined they’d be published authors, having written the book as a dare by Stohl’s daughter and Garcia’s former students. Stohl and Garcia credit Marr as a mentor and are grateful to many of the other established authors who’ve taken them under their wings.

“We love the idea of touring with the people who write the books we love to read and who are our friends,” says Stohl. The obvious friendship and support that the authors feel for one another is certain to carry over to the tour events. The authors all spoke enthusiastically about meeting fans, many of whom they regularly interact with on their blogs and via Twitter.

As they did when identifying potential authors, Marr and Armstrong came up with what they call their dream list of bookstores — and, yes, Kepler’s was most certainly one of the top choices, according to Marr. “I love Kepler’s!” she says simply. 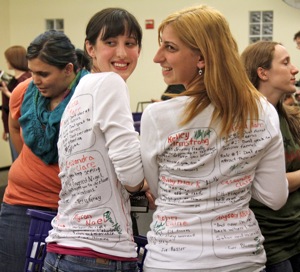 The Menlo event is hosted by both Kepler’s and the Menlo Park Library, an idea that originated with Marr, who has strong relationships with both from past tours. Holding the event at the library will be important, as the expected turnout (typically half teens and half adults) could be well over the projected 300-plus people. Some Smart Chicks stops held earlier this week saw nearly 500 fans eager to listen, ask questions, and get their books — or t-shirts — signed. (Visit Melissa Marr’s Website to download a customized  souvenir poster of the event that you can print at home and bring to have signed by everyone.)

Like Marr, several of the authors appearing in Menlo Park have ties to the Bay Area. When InMenlo spoke to each of them prior to the tour, they expressed excitement at coming back here. For Armstrong, it’s the place where she first met up with Marr, and what followed was a both a great friendship and a professional collaboration. De la Cruz spent her high school years in San Francisco and still has family in the area, while Stohl received her masters from Stanford and met her husband at the Dish.

What fans can expect

Given the all-star line-up, those planning on attending Saturday’s event at 6:00 pm should prepare to do some waiting before they can meet their favorite authors. To make the time pass more quickly, the authors are bringing plenty of give-away items. One of the most coveted, though, can’t be taken home just yet: The chance to have a character named after you in a forthcoming anthology that features many of the Smart Chicks.

It’s just another touch that makes the tour special. Says Marr, “We’re doing something really, truly unique and it feels great. The support we have received from our fans, the booksellers, and our publishers has been overwhelming.”

Photos by Vania Stoyanova, VLC Photo. Used with permission from the Smart Chicks Kick It tour.

It sounds like a great event. Too bad I live too far away to go. Best wishes.

Please visit my blog and leave a comment. Thanks!