Attending Smart Chicks Kick It at the library tonight (9/18)? Here’s what you need to know 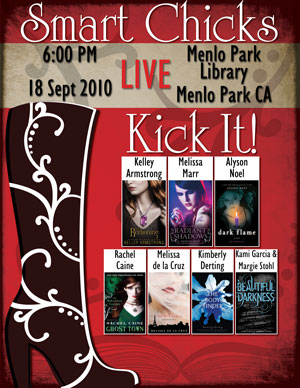 If previous stops this week in Austin, Houston, Jackson, and Phoenix — where 350 to 400 fans was the typical turn-out — are any guide, the event is expected to be standing room only.  In fact, the library had to scrap its original plans to host the event in the inviting new teen area and instead moved it to the main adult area in order to accommodate more people.

While the official start time is 6:00 pm, tour organizers recommend getting their as early as possible, as the writers will be on hand to meet and greet fans before things get started. But keep in mind that the library has to close to the general public at 5:00 pm and get things ready before opening the doors to early birds. Those coming early can line-up outside of the main entrance until it is time to go inside.

But not to worry reassures Angela Kroner, one of the library’s dedicated Youth Services staff who is working with Kepler’s and organizers Marr and Armstrong on the event, “We will do our best to open back up as soon as possible, but there is no need for anyone to panic.  Just come and enjoy the experience and let us worry about the flow of the evening! ”

An evening of smart talk, fun prizes — and lots of book signing

The large crowds don’t worry tour mastermind, author Melissa Marr. “We’ve got a plan,” she says, one that’s based on her experiencing of having done four book tours in the past five years. The evening will begin with author introductions, followed by a Q&A in which the panel will field general questions.

Says Marr, “One of the things that’s important to us is that this is a tour about Smart Chicks; it’s not a tour about me, or Kelley, or Alyson. Our goal is to talk to you as a group, not about specific character or book questions. But you can ask us those when you get to us in line.”

And then comes what many fans have turned out for: the chance to get books signed by so many of their favorite authors in one night. You are free to bring books from home, but for each book you buy on-site from Kepler’s you’ll be entered in to a raffle for special prizes, such as tour t-shirts and gift baskets featuring Smart Chicks books. They’ll also be lots of other goodies, or swag, including tattoos, signed book plates, and jewelry.

Marr understands that fans may not be able to buy all the books they’d like, which is why she came up with event posters for each stop on the tour. Fans are encouraged to download and print a poster (shown at the top of this post) at home and bring it to the event to be signed by all the Smart Chicks. Explains the library’s Kroner, “That way, each person can get face time — and if you’ve ever been to an author event, you’ll know that that one-on-one time is where memories and impressions are made.”

She adds, “Ultimately, for us, it is about the attendees having a good time, getting to meet their favorite authors, and perhaps being inspired to write…or keep on reading.”