LUCE to appear in Menlo backyard concert on Saturday (9/25) 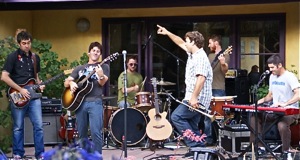 Gwen Fuller is hosting the final Blue Rock House Concert this Saturday, Sept. 25 featuring the band LUCE. “Luce has performed at some of the most popular venues in the Bay Area, but they asked to return to the intimate Blue Rock garden setting because they said it was one of the most beautiful places they’ve ever played – lucky us!” Gwen writes in an email.

As with the earlier Blue Rock House concert, Gwen asks that you RSVP in advance; arrive with $25 cash per attendee to pay the band; bring a blanket, towel or lawn chair; pack your own picnic dinner.

LUCE will play from 6:00 to 7:30 pm; grounds open at 5:00. More information is available on the Blue Rock House Concert website.