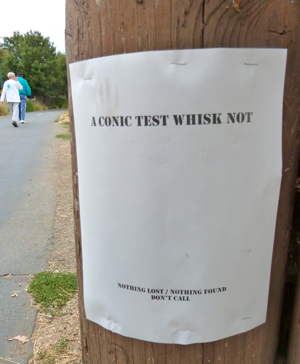 OK, we have absolutely not a clue what “a conic test whisk not” means. A web search revealed the Wikipedia definition of “conic” but that only made the sign more puzzling:

“In mathematics, a conic section (or just conic) is a curve obtained by intersecting a cone (more precisely, a right circular conical surface) with a plane. In analytic geometry, a conic may be defined as a plane algebraic curve of degree 2. It can be defined as the locus of points whose distances are in a fixed ratio to some point, called a focus, and some line, called a directrix. The conic sections were named and studied as long ago as 200 BC, when Apollonius of Perga undertook a systematic study of their properties.”

What we do know is that people often post lost pet signs on the telephone poles near the San Mateo bike bridge where this sign was spotted earlier today. Might this be some conceptual art project?

Perhaps the phrase is an anagram, though I must admit, I don’t know for what!

I’ve seen bizarre notes like this stapled or pasted to posts around Belle Haven as well.