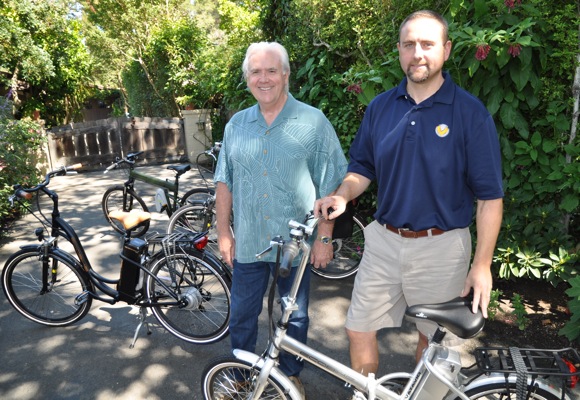 Dan Robinson’s career was in medical center administration before taking a corporate position five years before retiring. Son Joe started off in human resources management, working in Southern California. So it’s not all together logical to find them now in business together selling electric bikes. But one by one all the pieces came together, and they launched Velolectric two years ago.

InMenlo visited with father and son (and wife/mother Sharri) in the driveway of the senior Robinsons’ Felton Gables home. One thing was immediately evident – electric bikes today are leaner, meaner and lightweight compared to their yesteryear counterparts. They’re street legal to anyone over 16 – helmets must be worn by all riders – and they’re also permissible on bicycle paths (the “no motorized vehicle” signs pertain to gasoline powered vehicles).

“After I retired, Sharri and I did a good bit of traveling and noticed that in Europe people use bikes not just for sport but for transportation,” says Dan. “I owned an electric scooter and started doing some research on electric bike usage in this country. Plus, I always had a dream of being in business with my son.”

Joe adds that “It’s nice to be part of a solution. Now we’re working on building awareness, about the many electric bike options and their high quality.”

Dan and Joe describe their business venture as “surviving not thriving.” They have a retail store in San Carlos, are the largest electric bike distributor in Northern California. and also sell online. They see aging baby boomers as potential big market.