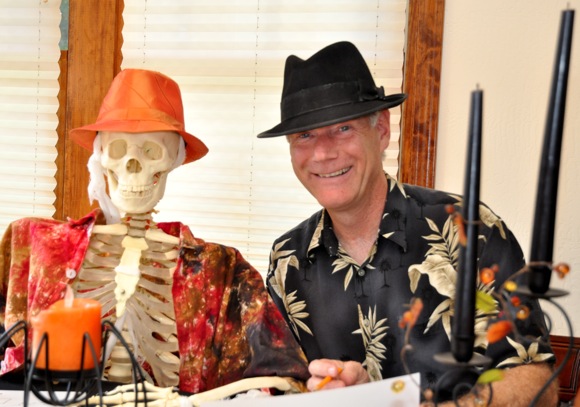 Lots of families have skeletons in the closet. At the Stahler household, his name is Uncle Sid. He’s just one of the stars of Al Stahler’s annual Halloween extravaganza, where he turns his front yard into a themed fright show to the delight of thousands of trick or treaters.

“I started decorating my parents house when I was too old to trick or treat,” says the Menlo Park resident whose house is on Valparaiso close to the Alameda, “and have been doing it ever since.”

His Menlo shows began somewhat modestly in the mid-80s. “I put out some decorations and played spooky music and we had a dozen or so trick or treaters,” he says.

But his annual display slowly became grander and grander and really took off with “Thunder and Lightning” in 1999. He’s followed that with, among others, Pirates of the Caribbean, Lord of the Rings, Volcano, The Swamp, and Castle Maze. Last year it was Star Wars. Now he gets 1,000 trick or treaters.

To create each year’s show, he recycles the original setups and collects other recycled lumber and material. He also has a stash of costumes and props – not to mention a cadre of friends and family who help him put it together each year. Early preparation was started this past weekend and will continue right up to the witching hour of 5:00 pm this Sunday.

What’s Al planning this year? “I’m creating a prehistoric swamp – new and improved,” he says. “We’re going to use a giant saber tooth tiger skull as the entrance. Kids will walk through its mouth. The teeth will be like pillars.”

And Al can hardly wait.

We look forward to this every year. Thank you Al

Thanks for making this Halloween so much fun!