In praise of one of Menlo’s magnificent heritage oaks 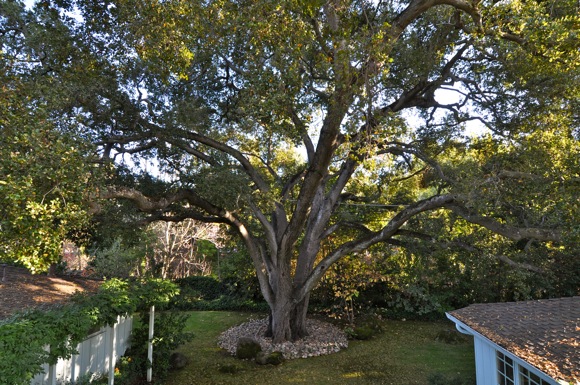 When we moved to Menlo Park in 1973, we wanted a house with something natural to look at besides a neighbor’s back fence.  However, we never dreamed that we’d find one of the largest oaks in Menlo, with a creek behind it as well.  We were so awestruck by the tree that we probably would have bought the house on the property in any condition!

In our early years there, the tree was even larger than it is today, but a low-hanging limb had to be removed.  On the limb we found a heart with initials carved in it, as well as a tent peg at the foot — souvenirs of the last two years of World War I, when much of Menlo Park and Palo Alto were part of Camp Fremont.  The two infantry divisions whose tents were pitched under the oak trees of Menlo Park made it to Siberia but never to the front.  After that time, much of the Menlo land reverted to pasture until the first houses were built in the late 1940s and early 1950s. 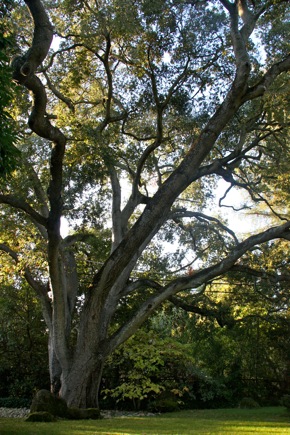 The tree saw much more history than that, however, as its age has been estimated at anywhere from 250 to 350 years.  It might have been as much as 100 years old when the Rancho de las Pulgas (ranging from San Francisquito Creek to San Mateo Creek and from the San Francisco Bay to the hills) was granted by Spain to the Arguello family in 1795.  By the time Menlo’s founders purchased 1700 acres of land and erected a wooden arch at Middle and El Camino bearing the name “Menlo Park,” the tree may have been over 150 years old.  Very much a part of Menlo’s heritage, the tree received a Heritage Tree Award in 1999.

Heritage Tree Awards are still bestowed today by Menlo Park’s Environmental Quality Commission.  To qualify, a tree is measured 54″ above grade, and an oak must measure 31.5″ in circumference.  Our tree has a circumference of 22 feet — but we really never thought of it as “our” tree.  We have simply been the caretakers of a natural wonder, which with luck and loving maintenance will live to see more of Menlo Park’s history.

Footnote:  Contributor Sue Swezey’s husband, Bob, was a member of the Environmental Quality Commission from 2002-2007.  He passed away in August, 2007.