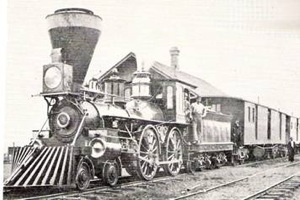 Ever since Peninsula residents celebrated the inauguration of regular passenger service between San Francisco and San Jose 146 years ago, Menlo Park’s history has been closely aligned with that of the railroad.  In 1864 two trains each day made the trip between the two cities, taking two hours and 20 minutes.  Today, over 60 trains stop each weekday at our city’s historic station with scheduled express runs of only 59 minutes. 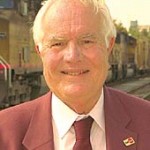 On Sunday afternoon, November 21, at the annual meeting of the Menlo Park Historical Association, Portola Valley resident Arthur Lloyd will speak on this vital chapter of local history, “Menlo Park and the Railroad:  the First Hundred Years.”

Lloyd’s life has been intimately affiliated with travel, transportation and railroads, beginning with the San Francisco and Napa Valley Railroad in the early 1940’s, continuing with the Western Pacific, and serving for 20 years as Amtrak’s Western Region Director of Sales, of Public Affairs, and of Government Affairs.

Since his retirement from Amtrak, Lloyd has remained actively involved with transportation matters as a member of numerous railroad history groups and museums, a Director of the San Mateo County Transit District, and a Director of Caltrain’s Joint Powers Board.

The program, which begins at 2:00 pm, will be held in the Fireside Room at the Menlo Park Recreation Center.