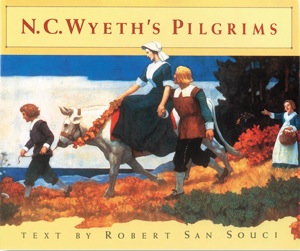 Menlo Park librarian Angela Haight, a colleague of Michele Burhham who recommended some titles yesterday, suggests more good reading for kids in time for the Thanksgiving holiday. Here is her list of books (some titles duplicated Michele’s and aren’t included):

The Thanksgiving Treasure by Gail Rock  (ages 9-12). Girl befriends crochety old men to both their benefit.

Over The River and Through the Woods by Lydia Maria Child (ages 4-8). Urban, fun take on the traditional poem that is beautifully illustrated.

Johnny Appleseed by Reeve Lindberg (ages 4-8) A poem and not strictly Thanksgiving, but goes with the season.

This is the Turkey by Abby Levine (ages 3-5) Humorous picture book and Max and his family’s Thanksgiving.

Wilderness Cat by Natalie Kinsey-Warnock (ages 4-8) An early America story, not really Thanksgiving, but has the theme and beautiful illustrations.

Beautiful choices! Thanks for sharing!