Learn all about the largest scientific instrument ever built 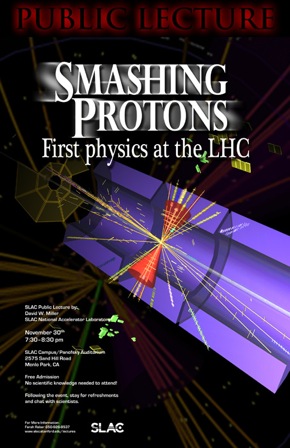 Scientists at CERN in Geneva, Switzerland, are using the largest scientific instrument ever built – the Large Hadron Collider (LHC) – to study particles more than a million times smaller than a speck of dust. You can find out why tonight (11/30) at a public lecture beginning at 7:30 pm at SLAC’s Panofsky Auditorium. For about a year, scientists have been smashing protons into each other and cameras have recorded the collisions millions of times per second. At tonight’s lecture you’ll learn about how the LHC and its detectors work, what the photographs from LHC are revealing, and how scientists will use this technology to explore the universe’s deepest secrets.

Hello,
Exactly what I was looking for – needed a new idea for this Christmas as it will be differnt for us. Thanks for sharing, am bookmarking so I can find it and practice before the “big week”.
Thaks