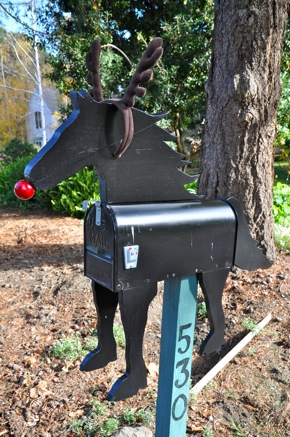 We thought we were just getting the lowdown on the fun horse-turned-Rudolph mailbox spotted in the Menlo Oaks neighborhood. But instead we were treated to a coincidence. According to homeowner Andrea Jevans, her daughter had picked out the mailbox when she was a horse crazy seven-year-old. “Her father was away for her birthday and told her she could buy anything on the Breyers website,” recalled Andrea.

Further conversation revealed that the daughter, now teenager, is  Maya Jevans, featured on InMenlo gathering food for the annual Menlo-Atherton holiday drive in front of TJ’s. Andrea was good enough to fill in more of the blanks:

“Maya and her friends, Ty, Margret and Kendra – plus many more – have a class goal of 15,000 items. Yesterday they gathered 904.  I am not sure what the total class gathering is at this point.

“The kids are motivated by their teacher.  As a reward for achieving the goal, they get to take a final next year instead of this semester. They clearly love the spirit even more than the reward.

“My Maya is a kick and a decorator and community spirit girl, very active in drama and MAPAC productions.”

And yes, it was Maya who converted her mailbox from horse to reindeer!