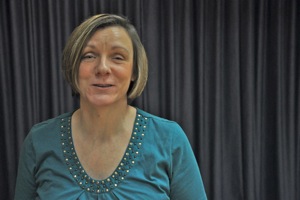 Music has always been a part of April McNeely’s life. “I sang my first solo in church when I was six,” she says. “I still perform occasionally, but today I get more enjoyment watching my students perform.”

April teaches voice privately and at Santa Clara University. For the past six years she’s lead the Menlo Park Chorus as Music Director and Conductor and recently formed a new children’s chorus.

Both can be heard during a winter concert titled Twisted Christmas at St. Bede’s Church on Friday, Dec. 10, 2010 at 7:30 pm. A free sneak preview featuring a sampling of seasonal songs will be performed at the Menlo Park Library on Saturday, Dec. 4, 2010 at 11:00 am. Tickets to the Dec. 10th concert are available at the door – $15 general admission, $12 senior/students, under 12 free.

While April admits to being partial to Renaissance choral music – “all the parts have individual melodies” – she says she really enjoys all music. “The challenge for me as a teacher is finding songs the individual or group likes. If a song isn’t liked, it doesn’t get practiced!” 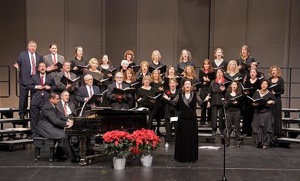 For Twisted Christmas, the Chorus is doing several pieces that are traditional Christmas songs but not in the traditional way. “For example,” April says, “we’re doing a full gospel version of O Holy Night. It’s the traditional melody but it’s not like any O Holy Night you’ve ever heard before. We’re also doing a piece called Variations on Jingle Bells that is pretty awesome!”

Thirty nine people, most of whom are Menlo residents, are registered for the Menlo Park Chorus currently. A few members  have been singing with the Chorus since its beginning 12 years ago. For performances, a couple of local professional voices are added. New Chorus members are always welcome and try outs are free. If you’re interested in joining, you’re encouraged to fill out an online form.