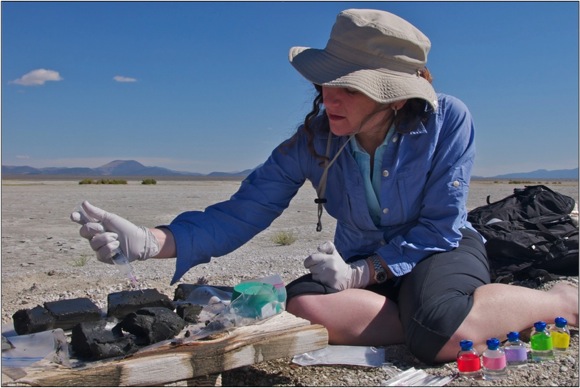 Researchers, lead by Wolfe-Simon,  conducting tests in the harsh environment of California’s Mono Lake have discovered the first known microorganism on Earth able to thrive and reproduce using the toxic chemical arsenic. The microorganism substitutes arsenic for phosphorus in its cell components.

This finding of an alternative biochemistry makeup will alter biology textbooks and expand the scope of the search for life beyond Earth, essentially expanding the definition of life.

Carbon, hydrogen, nitrogen, oxygen, phosphorus and sulfur are the six basic building blocks of all known forms of life on Earth. Phosphorus is part of the chemical backbone of DNA and RNA, the structures that carry genetic instructions for life, and is considered an essential element for all living cells.

Phosphorus is a central component of the energy-carrying molecule in all cells (adenosine triphosphate) and also the phospholipids that form all cell membranes. Arsenic, which is chemically similar to phosphorus, is poisonous for most life on Earth. Arsenic disrupts metabolic pathways because chemically it behaves similarly to phosphate.

“We know that some microbes can breathe arsenic, but what we’ve found is a microbe doing something new – building parts of itself out of arsenic,” said Wolfe-Simon. “If something here on Earth can do something so unexpected, what else can life do that we haven’t seen yet?”

For the curious, more details are available on the NASA astrobiology website.

Photo of Felisa Wolfe-Simon in the field at Mono Lake, courtesy of NASA

This is a great find. Good job Ms. Wolfe