Fanning the flames of fire safety, with demonstrations by the Menlo Park Fire Protection District 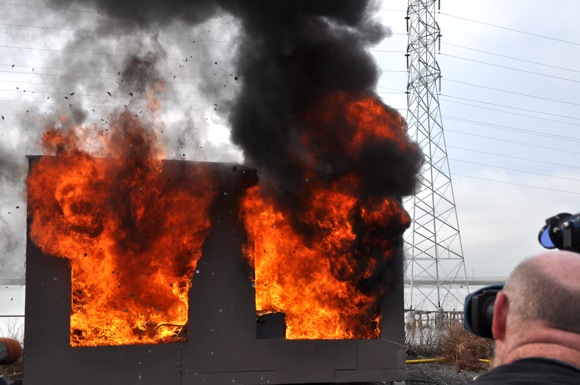 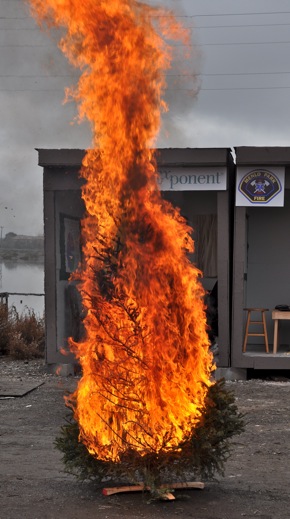 In what has become the annual gathering of the [media] clan, Menlo Park Fire Protection District Chief Harold Schapelhouman shepherded the assembled camera crews and onlookers midday Thursday on how not to turn your home – or Christmas tree – into a bonfire this holiday season. The various demonstrations each had its purpose – none more dramatic than how quickly a tree can incinerate.

Another demonstration (pictured, top) had as much to do with response time and what to do if there is a fire in your home – in this case caused by candles that caught adjacent wall hangings on fire. With the flames heating up those assembled and particles of ash sticking to their clothes – thanks to some moisture in the air – Chief Schapelhouman reminded people that at the first sign of flames, leave the home and call 911. The response time of the department is about six minutes from the time the equipment leaves the stations, according to the Chief. 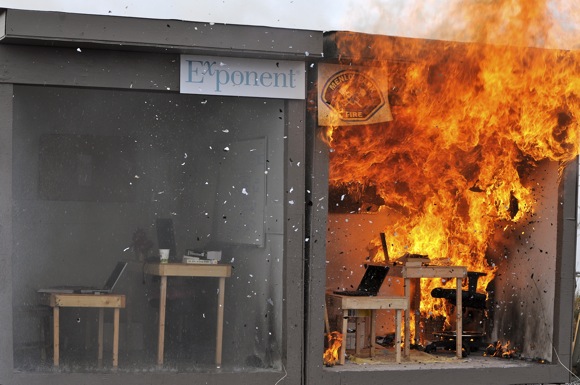 As those who’ve followed the Chief for some years, he often has a new issue to bring to the public’s attention. So this year’s fire safety demonstration included two simulated school classroom fires, one equipped with a fire sprinkler system (above, left) and one without this “critical safety feature” (above, right).  The Chief explained that in recent years some schools using local bond funds have sought a little known exemption under the law that allows them to build new schools without sprinkler systems. The Menlo Park Fire Protection District, which backed the legislation (Green Oak Bill) that changed the law, is asking school districts around the state to voluntarily sign a pledge not to use the exemption.