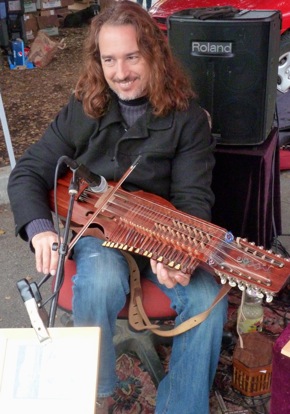 An unusual instrument was heard at today’s farmers market in Menlo Park, a keyed fiddle played by musician Aryen Frankfurter, giving seasonal favorites a lovely, distinctive sound. In addition to that 12th century instrument – which originated in Sweden and is also known as nyckelharpa – Frankfurter plays Irish harp and violin/viola/cello. His credits include performing for Prince Charles and to large audiences in Dalhalla, Sweden. He also does school and library demonstrations.

“I consider myself a performing artist,” he said. “I spend the spring and summer playing fairs and festivals and appear at farmers markets the rest of the year, including two or three visits to Menlo’s market.”

You can learn more about Frankfurter, his passion for both the keyed fiddle and Irish harp, and sample and buy his music on his website.