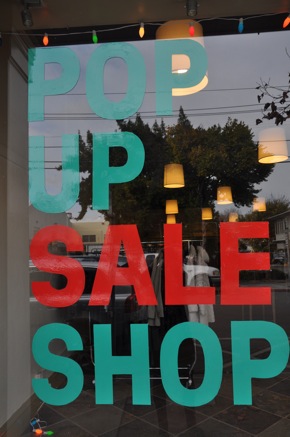 Angela Hoenighausen didn’t have to go far to find a suitable space for her pop up sale store. It’s right next door to her permanent store, Angela, on Chestnut St. in downtown Menlo Park.

Pop up stores started appearing earlier this decade. They are often sample sales or one day events tied around a cocktail party. The concept is to create buzz and, when they’re by invitation only, exclusivity.

Angela’s pop up store will remain through the end of the year.